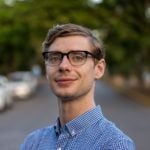 Medically Reviewed by Dr. Melody Huang, O.D.
4 sources cited
Vision Center is funded by our readers. We may earn commissions if you purchase something via one of our links.

What Does a Visual Acuity Score Mean?

Visual acuity refers to a person's ability to see small details. It is also referred to as clarity of vision or sharpness of vision.

A visual acuity score is the result of a vision test performed by an optometrist or ophthalmologist. Opticians, technicians, and nurses can also perform a visual acuity measurement.

It is usually written as a fraction. This measurement describes your ability to see an object from 20 feet away compared to a person with normal vision.

For example, 20/20 vision means that you can see an object clearly from 20 feet away.

20/25 vision means that you need to be 20 feet away to see clearly what a person with normal vision can see from 25 feet away.

Optometrists use your visual acuity to help determine your eyeglasses prescription.

Visual acuity is dependent on a combination of optical and neural elements, including:

Refractive errors are visual impairments that affect the way light is bent, or refracted, in your eyeball.

Neural factors occur in the retina, brain, or the pathway between the two.

Most of the time, lower visual acuity can be corrected by eyeglasses, contact lenses, or refractive surgeries.

What is a Visual Acuity Test?

Eye charts are the most common method of visual acuity testing. They show several rows of optotypes (letters, numbers, or symbols) that get progressively smaller towards the bottom.

The most frequently used eye charts are the Snellen Chart (left) and the Tumbling E Chart (right).

How is a Visual Acuity Test Performed?

An optometrist or ophthalmologist typically performs a visual acuity test.

You'll cover your right or left eye and read the chart starting at the top and proceeding downwards until you can't distinguish the letters.

Then you'll switch eyes and repeat the process from the same viewing distance. The doctor will use the line with the smallest visible letter size to give you your results.

How to Read the Results of a Visual Acuity Test

Visual acuity is typically measured in fractions or decimals.

The first number in the fraction refers to the testing distance, and the second number refers to the distance someone with "normal" vision could see the same details from.

Most vision testing in the United States uses the Snellen letter chart, which requires a test distance of 20 feet.

For example, 20/20 vision means that a person can see an object as well as anyone with "normal" vision from 20 feet.

If you have 20/30 vision (a lower visual acuity score), it means the details you see from 20 feet away can be seen from 30 feet away by someone with "normal" visual abilities.

Basically, the higher the second fraction number, the lower the visual function.

In most other countries, visual acuity is expressed using the metric system. Because 20 feet is equivalent to 6.096 meters, 20/20 vision is equal to 6/6 vision.

The National Vision Research Institute of Australia developed the LogMAR chart (Logarithm of the Minimum Angle of Resolution) in 1976.

The Bailey-Lovie chart and ETDRS chart (Early Treatment Diabetic Retinopathy Study) are two charts that use the LogMAR scale.

What is the normal visual acuity?

How is visual acuity measured?

An optometrist or ophthalmologist typically measures visual acuity. Although, opticians, technicians, and nurses can also measure it. Your score will be in feet, meters, decimals, or the LogMAR scale.

What does a visual acuity score mean?

A visual acuity score is a measurement of a person’s ability to see small details with precision. It is also known as clarity of vision or sharpness of vision. 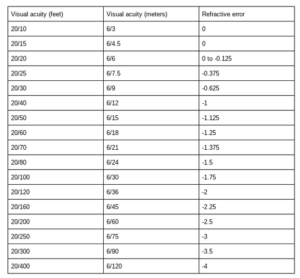 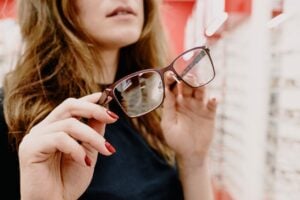 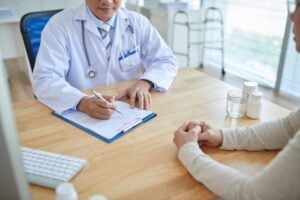 Michael Bayba
Content Contributor
Michael is the content strategist and a lead content writer for Vision Center. With eight years of experience in the world of content strategy and creation, Michael specializes in medical copywriting and advanced research methodologies.