Blue eyes have fascinated people for centuries. In cultures around the world, they are seen as beautiful yet also cold. Blue eyes are rare, making up just 8-10% of the world’s population.

Blue eyes are caused by a relative lack of melanin in the iris. Just like your skin and hair, how much melanin you have determines your eye color.

All eyes are technically brown because melanin itself is brown. People with more melanin tend to have brown eyes, which is the most common eye color. Those with lighter eyes tend to have less melanin.

The reason for this has to do with how light interacts with melanin in the iris. When light hits the iris, melanin causes it to split into various colors on the spectrum.

Eyes with less melanin can thus appear to be lighter colors like green or blue.

Genetics determine eye color. Of the at least 16 genes associated with eye color, one of them, the OCA2, is important for producing melanin.

Blue-eyed people inherit a mutation that causes that gene not to express itself. That mutation, scientists believe, first occurred in a single human from the Black Sea region of Europe between 6,000-10,000 years ago. This makes all blue-eyed people (very) distant relatives.2

The lack of melanin in blue eyes allows more light to pass through. As a result, people with blue eyes are somewhat better at seeing at night than people with darker eyes.

By the same token, people with blue eyes find it challenging to adjust to bright sunlight. This condition is known as photophobia — relatively harmless, but it makes bright days a bit more uncomfortable.

Thirty of the last forty-six presidents (65%) have had blue eyes.

According to a poll from 1800Contacts, the bulk of respondents rated blue as the color they’d most like their romantic partner’s eyes to have. And 47.6% of people said they wish they had blue eyes themselves.

6. Most Common in Europe

Blue eyes are most common in people of European descent, mainly from Western Europe and Scandinavia. Particular countries with high percentages of blue-eyed people include Estonia, Finland, Ireland, and Scotland.

7. Most Likely to Succeed

Of all eye colors, those with blue eyes reported getting a raise or promotion at work, according to a poll.

A study of pregnant women found that those with lighter eyes experienced less pain than darker-eyed women. They also had less issues with sleep, anxiety, and depression.6

There is no actual “blue” pigment for eyes. People with brown eyes have them because melanin is a brown pigment.

Blue eyes simply appear blue because the lack of melanin causes light to split into a color spectrum. This effect is known as Rayleigh scattering.

The result of this scattering of light is blue light hitting the top of the iris. This gives the eyes their blue appearance.

Are People With Blue Eyes at Risk for Health Problems?

According to some Italian researchers, blue eyes may be a risk factor for Type 1 Diabetes.1

Blue-eyed people are also more susceptible to eye melanoma, also known as ocular melanoma. This is cancer of a layer of the eye called the uvea.

Complications from eye melanoma include glaucoma and vision loss. The cancer can also spread to the liver, lungs, and bones.

When Does a Baby's Eye Color Change? 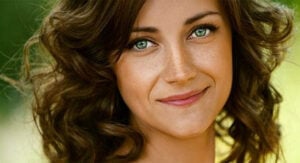 When Does a Baby's Eye Color Change?