Pingueculae are very common. About 10 percent of people experience a pinguecula or a related condition at some point. People with chronic conditions like kidney disease have a higher risk of developing them.

Will a Pinguecula Go Away By Itself?

Pingueculae don’t go away on their own and don’t require treatment in most cases. However, they can become inflamed (pingueculitis), during which they may appear red and swollen.

Your optometrist can prescribe anti-inflammatory drops to reduce symptoms. Most cases of pingueculitis resolve within several days. The treatment reduces inflammation but won't make the pinguecula go away.

How is a Pinguecula Diagnosed?

An eye doctor can diagnose pingueculae with a comprehensive eye exam.

They’ll look in your eye and determine if there are any foreign bodies causing irritation. They can also see the raised bump on the conjunctiva when someone has a pinguecula.

Your doctor might order a conjunctival biopsy. This helps them rule out other conditions or determine the underlying cause of the pinguecula.

A pinguecula may not need treatment if it doesn’t cause discomfort. However, it won’t go away on its own. Various treatments can relieve pingueculae symptoms, including:

Your doctor can prescribe eye ointment or drops if OTC treatments don’t help. Steroid eye drops can reduce swelling and redness. They can also ease the sensation that something is in your eye.

Another option is to wear scleral contact lenses. These cover both the cornea and most of the sclera. They help prevent pinguecula growth and decrease irritation from the contact lens rubbing against the pinguecula.

However, scleral contacts that don’t fit properly can also contribute to inflammation and irritation of the pinguecula.

Surgery is rarely necessary for pingueculae. However, it may be considered if the pinguecula causes chronic eye irritation or vision problems. Pingueculitis, inflammation due to a pinguecula, can also indicate the need for surgery.

Some people choose surgical removal if they’re bothered by how the pinguecula looks.

Reasons to consider the removal of a pinguecula include:

The exact cause of pinguecula isn’t fully understood. However, studies show that certain environmental factors can make it more likely to develop:

Pinguecula is sometimes called “surfer’s eye.” This is because it’s fairly common among people who spend a lot of time on the water and in the sun and wind, as is the case with surfers. Additionally, fresh snow is reflective and can expose eyes to up to 80 percent of the sun's UV rays.

Living in a Tropical Climate

Pinguecula is more common among people who live in tropical environments. However, frequent exposure to eye irritants can cause a pinguecula to form in any climate.

Signs and Symptoms of a Pinguecula

Signs and symptoms of a pinguecula include:

Pinguecula rarely causes pain. It’s possible to have more than one growth in the same eye.

How to Prevent a Pinguecula

You can protect your eyes from developing a pinguecula by:

Pinguecula and pterygium are similar conditions. Both are linked to sun exposure and develop on the conjunctiva.

Differences between pinguecula and pterygium include:

Many people find relief from pterygium symptoms with nonsurgical treatment from an eye doctor. Surgery to remove the pterygium may be necessary, but the growth can return afterward. 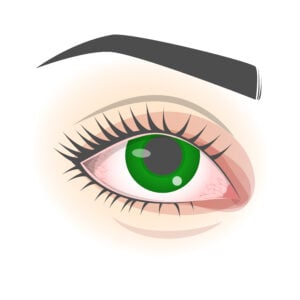 Lauren Steinheimer
Content Contributor
Lauren completed a bachelor's degree in biopsychology from The College of New Jersey and non-degree graduate coursework in public health at Princeton University. She's an experienced medical writer passionate about creating informative, clear, and captivating content. Outside of writing, Lauren runs a small farm with her husband and their four big dogs.