Sanpaku is a Japanese face-reading term translated as "three whites." Sanpaku eyes have more portions of the whites (sclera) exposed. The condition can be categorized into two types based on the position of the exposed sclera:

Sometimes, the sclera is visible on all sides (in people with bulging eyeballs or small irises). In western medicine, the condition is known as "scleral show."1

Sanpaku eyes are considered normal unless caused by certain health conditions. It's possible to have only one or both eyes affected.

A Japanese macrobiotic theorist, George Ohsawa, first described this condition in 1965. In his book "You Are All Sanpaku," Ohsawa claimed that "any sign of sanpaku meant that a man's entire system — physical, physiological and spiritual — was out of balance" and could signify an imminent threat or "early and tragic end."2

Although theorists can base their claims on human examples, there's no scientific evidence.

Although the psychological assessment of scleral show is based on superstition, science points to the following causes:

Your doctor can examine your eyes to rule out any disease or mental or physical imbalances. A notable treatment is quick and non-invasive hyaluronic acid (HA) fillers, used to improve constitutional scleral show.4

What is the Cooperative Eye Hypothesis?

The cooperative eye hypothesis is an evolutionary explanation of the eye's structural appearance.5 Although not universally accepted, it remains the most viable explanation for why eyes appear the way they do.

According to this hypothesis, the sclera is white to make the irises and pupils more visible. This allegedly enhances communication by enabling us to follow each others' gazes during interactions.

How Common are Sanpaku Eyes?

There is limited research on the prevalence of sanpaku eyes. However, this condition seems quite common. According to a study involving 100 Caucasian subjects, the researchers noted that yin sanpaku was common among all participants and the extent increased with head inclination.6

The study showed no variation based on age or sex. More research is required to determine the prevalence in normal and diseased eyes of all races.

How Do Sanpaku Eyes Differ From Standard Eyes?

The most significant difference between sanpaku and standard eyes is their appearance.

In normal eyes, the sclera is visible only on the left and right sides of the iris–the colored front part of the eye containing the pupil. The scleral portion above the iris is covered by the upper eyelid, while the lower eyelid covers the lower portion.

In sanpaku eyes, the sclera is visible above and/or below the iris when you look forward.

Sanpaku eyes are "normal" in most cases and do not require corrective care unless caused by eye trauma, aging, disease, or aesthetic plastic surgery. Scleral show is considered a serious complication of blepharoplasty.7

What Celebrities Have Sanpaku Eyes?

Sanpaku eyes gained popularity in western culture after face readers identified the trait in American president John F. Kennedy. Since then, many celebrities with this distinct eye appearance have been identified.

Like President Kennedy, some of these celebrities' fates seemingly justify the Japanese theory as documented by Ohsawa. 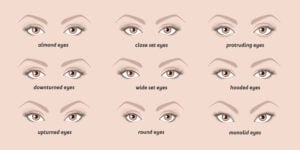 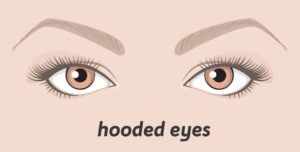 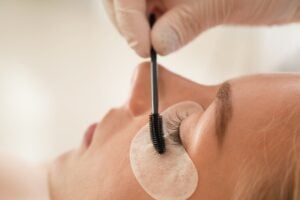 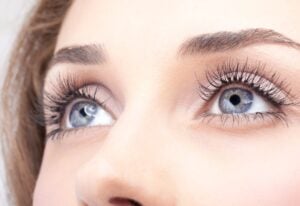