Early Signs of Alzheimer's in the Eye

Medically Reviewed by Dr. Melody Huang, O.D.
10 sources cited
Vision Center is funded by our readers. We may earn commissions if you purchase something via one of our links.

Alzheimer's disease is the most common cause of dementia. It affects more than 5.8 million people and is expected to increase to 14 million by 2060.1

Alzheimer's is a progressive disease caused by the build-up of proteins and fibers in brain cells, leading to a breakdown of neural function.

Symptoms of Alzheimer’s disease typically start after age 65 and include:

There is currently no cure for Alzheimer's, which is challenging to diagnose. However, researchers have found early signs of Alzheimer's can be found in the eye's retina.3

Connection Between Alzheimer’s and the Eyes

Because the eyes are part of the central nervous system (CNS), they are often referred to as the “window into the brain.”4

The optic nerve (communication pathway between the eyes and brain) and the retina (light-sensing tissue at the back of the eye) are extensions of brain tissue.

Because of this connection to the brain, the eyes can be affected by neurodegenerative diseases, including Alzheimer’s.

Research on the connection between the eyes and Alzheimer's disease is relatively new.

Studies have found that retinal scans of people diagnosed with Alzheimer's disease show:5

Early Signs of Alzheimer's in the Eye

While studies are limited, research shows that early signs of Alzheimer’s may be linked to two biomarkers found in an eye exam. These biomarkers include:6

The changes in vision and pupil responses result from amyloid plaques and tau, two critical proteins of Alzheimer's disease.

Early detection of these biomarkers can lead to early diagnosis and a better opportunity to benefit from treatment.

Standard comprehensive eye exams do not screen for Alzheimer’s or dementia specifically.

However, researchers have discovered that optical coherence tomography angiography (OCTA) is a fast and simple imaging technique used to detect retinal changes linked to the early stages of Alzheimer’s and other types of dementia.

Fluorescence lifetime imaging ophthalmoscopy (FLIO) is another tool that can detect a build-up of the protein beta-amyloid in the retina, which is also associated with Alzheimer’s disease.

While these retinal scans are promising, they are not available as standard eye exams.

Research has also shown that other common eye diseases increase a person’s risk of developing dementia.

These common eye diseases include:8

Other Signs and Symptoms of Dementia

Signs and symptoms of dementia include problems with:

The most significant known risk factor for Alzheimer's is being 65 or older. However, dementia is not a normal part of aging.

Early-onset Alzheimer's disease is associated with people developing symptoms before age 65. It affects about 5% of all Alzheimer's patients.10

Recent studies have found a link between people with Alzheimer's disease and specific changes to the eye's retina, including deterioration, tiny blood vessel density, and blood flow in the retinal capillaries.

While research on the connection between the eye and neurodegenerative diseases is new and limited, it shows promise in the early detection of early-stage Alzheimer's disease. 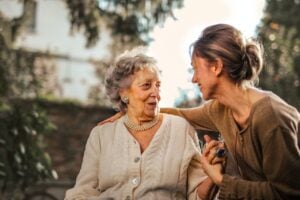 Tips for Caring for Individuals with Vision Loss and Dementia 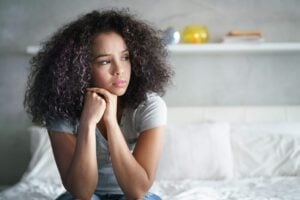 Ways Anxiety Can Affect Your Vision 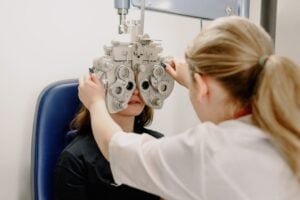 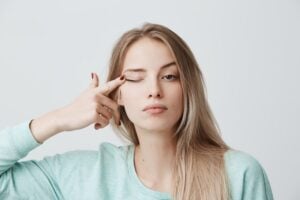 How to Get Something Out of Your Eye

Tips for Caring for Individuals with Vision Loss and Dementia

Ways Anxiety Can Affect Your Vision

How to Get Something Out of Your Eye